His Dallas nonprofit, City Square, had just transferred ownership of the legendary Forest Theatre to Forest Forward—the organization overseeing a $30 million investment in the theatre’s renovation and other projects to support South Dallas’s Black community.

Gilbert Gerst, manager of BOK Financial’s® Community Development Banking group, was the first person James called. Gerst was helping to raise funds for the project, which is aimed at erasing racist policies. 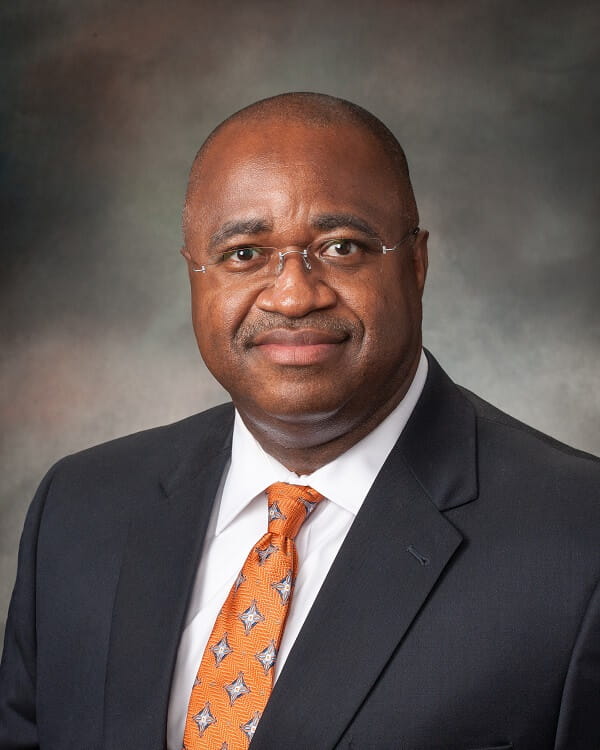 “I’m here to help the minority community better understand financial services. To me, that’s part of my mission of who I am and what I’m charged to do.”
– Gilbert Gerst, Community Development Banker

“He is one of the most important people in Dallas,” said James, whose organization is a longstanding client of the Bank of Texas, a subsidiary of BOK Financial Corporation. “And Forest Forward will be a community asset of huge benefit to everyone in the area.”

Gerst and his fellow board members met in March for the first time to discuss their mission: to reverse the intentional and harmful effects of segregation, white flight, redlining and the construction of two major highways, on Black people.

Over the years, community leaders and colleagues have come to rely on Gerst, a banker with 35 years of experience, including 10 years with BOK Financial, to help them turn worthy dreams into reality.

For nine years, his group has played an important role in BOK Financial, earning the “Outstanding” Community Reinvestment Act rating from the Office of the Comptroller of the Currency, a division of the U.S. Treasury ensuring fair access to financial services.

The rating is driven by the bank’s record of lending and investing in affordable housing, and the number of units financed, Gerst said.

Amidst the country’s reckoning on racial inequality—and as many businesses examine policies to foster diversity, equity and inclusion—Gerst’s approaches to both work and life are an important reminder: Businesses that do good, do well.

Gerst was born in Sweetwater, Texas, the son of Gilbert and Gladys Gerst. His father, who did not attend college, taught him the value of hard work and integrity. After jobs at a railroad and local meatpacking company, the elder Gilbert became a lab technician at a cement plant. Gladys Gerst, who graduated from Prairie View A&M University, ran the nonprofit People for Progress, helping low-income residents pay their bills, find housing and feed their families.

As a young man, Gerst embarked on a journey to excel while helping others to rise as well.

He earned a bachelor’s degree in accounting from the University of North Texas in 1985. He passed two parts of the CPA exam—audit and law—and regrets not taking all of the tests to qualify for the certification. “I didn’t finish it—it wasn’t exciting,” he said.

But that decision also helps to explain who Gerst is: He’s a people person who uses financial models to enrich lives, instead of working with numbers for numbers’ sake.

“I started at a bank in the finance department but realized what I really enjoyed was interacting with people. And I loved to sell stuff,” he said. “On the retail side, you get to build relationships.”

And he has been building them ever since. While managing a two-person team at BOK Financial, Gerst serves on the boards of Dallas Black Dance Theatre and State Fair of Texas. In addition, he is on the Black COVID-19 Task Force, established by Casey Thomas, a Dallas City Council member.

Gerst credits his wife Jacquelyn, a licensed professional counselor, for helping him improve his communication and listening skills, and better understand other people’s needs and learning styles.

“The community investment loans Gilbert works with are generally smaller loans than non-tax credit real estate lending, and they are really important to many smaller businesses and nonprofits that may struggle to find lenders,” said Dan Easley, executive director of the bank’s Commercial Real Estate division, which oversees Gerst’s Community Banking Development group.

An initiative to help low-income people get to work on time stands out in Easley’s mind. Three years ago, Gerst facilitated a $1.25 million loan to Irving, Texas-based On the Road Lending, which provides car loans and financial coaching to people making $1,500 or more a month. Lack of reliable transportation is the No. 1 reason people lose their jobs, according to the nonprofit.

“It’s a loan I’m really proud of,” Easley said, commending the efforts of On the Road Lending Founder and CEO Michelle Carson. “She recognized the need, particularly among single mothers who needed cars to get to and from work. Otherwise, they’re completely isolated. It was an important loan for the community.”

Gerst uses his community influence to make a difference. As a member of Dallas’s Black COVID-19 Task Force, he has been raising awareness about the coronavirus vaccine. “We’re making sure this vulnerable community understands the importance of the vaccine, has access to it and is knowledgeable about it—and gets registered,” he said.

Employment is another priority. The task force has identified the most in-demand jobs in Dallas, which include positions in accounting, transportation, IT, nursing and software development. “We’re trying to tie people and the programs to the training dollars,” he said, noting that the group is analyzing federal, state and local sources of funding.

His overarching dream is to see more people of color improve their financial literacy skills and pursue careers in finance and banking.

“I’m in an industry that is not known for its diversity—many minorities are not as knowledgeable about financing as their majority counterparts,” said Gerst, who earned a Master of Science in Real Estate in 2013 from University of Texas at Arlington.

“I’m here to help the minority community better understand financial services. To me, that’s part of my mission of who I am and what I’m charged to do,” he said.

As a member of BOK Financial’s Diversity and Inclusion Council, he is also engaged with efforts to make sure people of color excel inside the organization.

“There’s value in different life experiences and opinions,” he said. “They can help us be a better corporate citizen, a better company and a more profitable company. There are true financial benefits from being more diverse.”